3 Things to be Thankful for During Construction Season

In the Northwest corner of the United States, we have four seasons. We love them all, almost. These are not the seasons you were taught in school. They are fall, winter, spring, and construction season. That’s right. The fourth season, known in some places as summer, is marked by orange cones, hard-hat wearing shovel leaners, […]

Are You Ready for Some Football?

NFL training camps are ramping up, and everyone is ready for some football while at the same time baseball season is headed into the fall schedule. In some ways, it is a slow time of year for sports, in other ways it is a time of anticipation. Fantasy leagues are forming, team names are being […]

It’s a simple thing that happens every day. People get married, and when they do, one party takes the other one’s last name, symbolizing their family unity. Sometimes people choose to do things differently though. Some women keep their maiden name, while others retain it while hyphenating it with their new last name. My wife […]

This last week, a friend and humor hero of mine Kimmy Dee released her book of personal essays (and a couple of short stories thrown in for good measure) titled most appropriately Pussy Planet. Much like her blog, Turd Mountain, it is filled with irreverent toilet humor, dick jokes, and straight talk about her lady […] 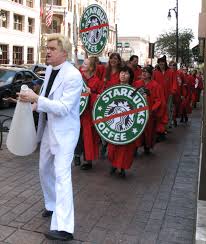 Starbucks. Despite controversy over how they treat employees, the company seems to have made big strides in many areas. No one who has ever worked as a barista for them or anyone else would say it’s an easy job. Hell, even hearing customer names and translating them into correct spelling, while a source of humor […]

Often, business dress includes a tie, the only modern form of fashionable self-strangulation. The same guy is in Bermuda shorts and sandals on the weekend, if he dresses at all to leave the house. If not, he may lie around in boxers streaming episodes of Orange is the New Black, unless he’s one of those […]

Peed There to Be There

Introducing a new blog, and blog thread. My girlfriend and I sometimes disagree over things of dubious importance, and the only fair way to settle the argument is to let you, the people decide. So we’ve started a blog, titled That’s What S(he) said. Find it here, and leave us your comments. Be sure to […]